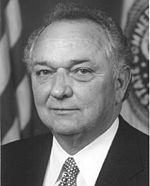 Former Surface Transportation Board (Board) Vice Chairman Gus A. Owen, a California Republican, was one of the Board’s three original Members (along with former Chairman Linda J. Morgan and former Vice Chairman J. J. Simmons, III).  He served from 1996 until the end of 1998.

Prior to his service with the Board, Vice Chairman Owen was a Commissioner at the Interstate Commerce Commission (ICC), the Board’s predecessor agency, from 1994 until that agency was abolished on December 31, 1995.