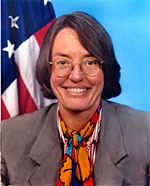 Former Chairman Linda J. Morgan, a Democrat from Maryland, was originally nominated to the Interstate Commerce Commission (ICC), the predecessor agency to the Surface Transportation Board (Board), by President Bill Clinton on February 2, 1994, and took the oath of office on April 28, 1994, for a five-year term expiring December 31, 1998.  On March 23, 1995, President Clinton designated her as the ICC’s Chairman.  After passage of the ICC Termination Act, which abolished the ICC and created the Board, she was designated Chairman of the Board on January 2, 1996.  On November 10, 1999, by a vote of 96-3, the Senate confirmed her for a second term at the Board expiring December 31, 2003, and on November 15, 1999, President Clinton re-designated her as Chairman.  In January 2001, she was asked by the Administration of President George W. Bush to continue to serve as Chairman.  In December 2002, the Bush Administration designated a new Chairman.

At the time of her appointment to the ICC, Chairman Morgan had served for 15 years in various positions with the Senate Committee on Commerce, Science, and Transportation, where she was responsible for much of the legislation that established the framework for today’s surface transportation system.  Most recently, she had served as the first female General Counsel of the Committee, then chaired by Senator Ernest F. Hollings (D-SC).  Before joining the Committee, Commissioner Morgan was an associate for two years in the Washington, D.C., law firm of Welch & Morgan, where she worked on a variety of legal and regulatory matters.

A native of the Washington, D.C., area, Chairman Morgan graduated from the Sidwell Friends School in 1969, and from Vassar College in 1973 with an A.B. in Hispanic Studies.  She received her law degree from the Georgetown University Law Center in 1976, and upon graduation, was presented the 1976 Law Center Award for the Most Outstanding Student Contribution.  In 1991, she completed the Program for Senior Managers in Government at Harvard University’s John F. Kennedy School of Government.  In January 1998, she was named by The Washington Post as one of five “People to Watch” for that year, and in December 1998, she received the Women’s Transportation Seminar’s Woman of the Year Award.  In April 1999, she received a Georgetown University Law Center Alumna of the Year Award for her contributions to the legal profession and society in general.