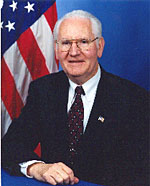 Former Vice Chairman Wayne O. Burkes, a Republican from Mississippi, was nominated to the Surface Transportation Board (Board) by President Clinton and was confirmed by the Senate on February 22, 1999, to complete a five-year term expiring December 31, 2002.

Vice Chairman Burkes received his B.S., M.Ed., & LL.D. degrees from Mississippi College and the M. Div. Degree from the New Orleans Baptist Theological Seminary.  He has done advanced graduate work at the University of Southern Mississippi, and is a graduate of the U.S. Air Force Pilot Training School, the Industrial College of the Armed Forces, the Air University’s Air War College, and the Transportation Executive Institute of the University of Virginia.