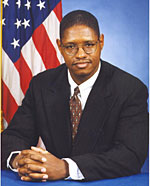 Former Surface Transportation Board (Board) Vice Chairman William Clyburn, Jr., a Democrat from South Carolina, was the fourth Member to serve on the Board since its inception in 1996.  He joined the Board in 1998 and served until the end of 2001.

Vice Chairman Clyburn received his B.S. in Ceramic Engineering from the Georgia Institute of Technology and his J.D. from the University of South Carolina.